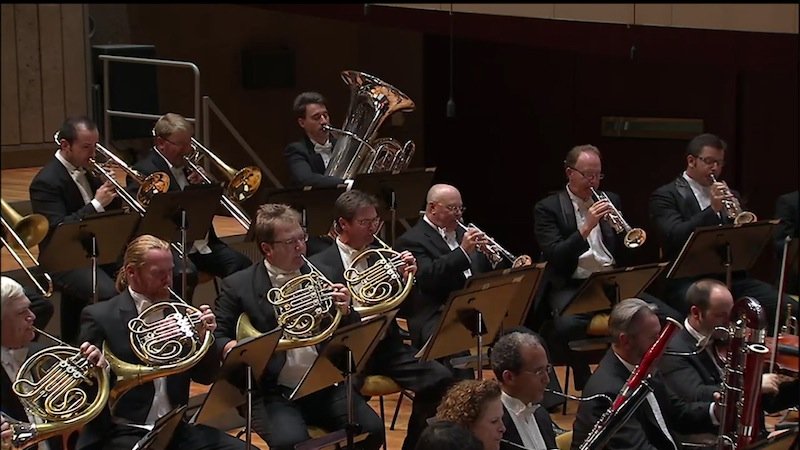 Brass instruments were originally intended as outdoor instruments- they were used for hunting, military functions (including in battle), royal fanfares, communication across long distances, and to announce emergencies to a township. Primitive brass instruments did not allow the flexibility (or the accuracy in tuning) to render them suitable for use in composed ensemble music. However as the construction of these instruments was refined over time, composers began to include brass parts in their music until it became standard practice by the early 17th century.

Brass instruments, perhaps more explicitly than the others, rely on the harmonic series to produce musical tones. To produce a particular note, the brass player must alter both the length of the pipe through which air is blown, and the shape of the lips to select the harmonic at which the air column vibrates. Early instruments which did not use such technical innovations as valves or slides to assist in changing the length of the pipe were consequently rather limited in the notes they could produce. Because of the severe limitations of the instruments construction, players were originally limited to the notes within the harmonic series of the fundamental (lowest) note. The natural trumpet is an example of such an instrument that is occasionally used today.

Happily, the members of the modern brass family are subject to no such limitation, and are fully chromatic to a large compass. However, much orchestral brass writing has retained characteristics of the antiquated style, including musical manoeuvres that were common on those early instruments. Brass parts often reference pastiche idioms of the hunt, the fanfare or the battle call. Composers often recognise the rich heritage of these instruments by writing based on the harmonic series; limiting the use of fast, virtuosic passages that would be commonplace in woodwind & string writing; relying on perfect (quartal / quintal) harmony; and by using short, staccato rhythmic figures in fanfare-like writing (especially for trumpets). It is therefore very important to understand the evolution, development and history of the brass section to understand clearly how and why composers use brass instruments as they do.

Given their origin as outdoor and function instruments, the brass section wields an extraordinary dynamic power. The brass are a dominating force within the orchestra, and can easily obliterate the sound of rest of the ensemble when allowed to do so by a reckless composer. At loud volumes, achieving balance between the brass and the rest of the orchestra is a paramount concern. The brass instruments are also, however, capable of very fine lyricism at lower dynamic levels. This versatility and historicity make the brass choir a unique challenge to write for, and effective brass parts add tremendously to any orchestral score.

Like the strings, brass players may insert a mute into the bell of the instrument to change the tone colour of the instrument. Using a mute is referred to as con sordino.  Players may also mute the sound of their instrument by inserting the right hand into the bell. The resulting sound is a softer, smoother, thinner and more nasal sound that is useful for both single notes and entire passages. Muted brass are often used when accompaniment is sparse, light and at low dynamics, where the full timbre of the instrument would otherwise be overbearing. Mutes also can help a brass instrument blend with reed wind instruments like the oboe.

Perhaps the simplest way for a blown instrument to change pitch is to manually change the length of the pipe, as the trombone player must do. The trombone is an instrument that has not changed all that much in 500 or so years since the design was first introduced- the player adjusts the length of the pipe and then selects a partial from the overtone series using the lips. The three most common varieties are the alto, tenor and bass trombone- a typical orchestral section consisting of two tenors and a bass.

It is an extremely versatile instrument that can be used either in an ensemble providing a lush harmonic background or as a solo instrument. It excels in contrapuntal settings with other trombones or with instruments from other sections. It doubles extremely well with other instruments in its pitch range such as the cello, but can double well with most instruments successfully (save for the extremely high instruments like piccolo) because of its soft tone and wide dynamic range.

Because of the (usually) large size of the instruments mouthpiece, fast tongued articulations are slightly more difficult to achieve than on trumpet. A player will fatigue easily if required to play fast tongued passages over an extended duration- and this applies to all low brass instruments. While this is not strictly a consideration for orchestral programming, it is better to adhere to this advice for the sake of realism. Additionally, the instruments extreme low register offers incomparable volume and harmonic richness at the expense of agility.

The trombone handles glissando the most gracefully of all brass instruments because of its playing mechanism. The player can quickly adjust the slide between two or more notes. Some brass sample libraries include scripts to achieve this kind of slide glissando, which is especially useful for modern writing where special effects are common (jazz / avant-garde / film scoring etc.)

The orchestral horn has its earliest history as a hunting instrument, often being marked “Cor de chasse” in early scores. Often referred to as the French Horn despite most of the developments in its modern construction taking place in Germany, the horn occupies a unique space within the brass choir- it fulfils many different functions in both chamber and orchestral music. The horn takes a central role as a component of both the woodwind and brass quintets- it compliments the woodwinds nicely with its warm, rich tone but also can compete with larger brass instruments in terms of dynamic range. It uses a complex network of tubes and valves, allowing the player to sound notes from multiple different harmonic series’. This is an evolution from the earlier natural horn that can only play from a single harmonic series at a time because there is only one length of tubing available to the horn player on that instrument.

The horn is as agile as any brass instrument, and makes a highly effective soloist in a range of different contexts. It has a very large range due to the extremely long (5.2m) length of tubing it uses. The timbre of the horn has enough brilliance and dynamic power to be heard clearly in the loudest tuttis, while its middle register, with its velvet-like quality serves exquisitely as an accompaniment to other solo instruments. The horns timbre changes dramatically at the different dynamic levels from pp to ff. Horn swells (rapid dynamic changes) and rips make great use of this timbral change across

The modern symphony orchestra typically uses four horns, divided into two separate parts. Composers throughout the centuries have made excellent use of the horns when played together in harmony, including lines doubled at the 3rd, 4th, 5th and 6th.

The trumpet is the most agile instrument in the brass family, and being the soprano of the section, it is often called upon to play very high passages at great speed, and at both dynamic extremes. The trumpet saw a development similar to that of the horn, evolving from a single-tubed natural trumpet to the modern C or B flat trumpet which uses valves and pistons. During the late renaissance and baroque periods saw great advances in the instruments construction, and consequently those periods saw a tremendous rise of the virtuoso in trumpet music. The modern trumpet can easily compete with the woodwinds in terms of sheer technical ability (range/speed/dynamics).

Like the horn, the timbre of the instrument changes radically at the different dynamic ranges, although it is easier to control at loud dynamics, especially in the extreme high & low registers. The trumpet is an especially effective as a solo instrument, as its high register is sharp and brilliant enough to be clearly heard clearly in most situations, while its agility allows it to execute even the most challenging and angular melodies with relative ease. The trumpet is at least as suitable for ensemble-writing, and in the lower register at softer dynamics, blends well with the other brass instruments to contribute to chords and homophonic writing. Its brilliant timbre is often used to conjure up a feeling of anticipation, agitation or excitement in modern orchestral music.

Because of its small mouthpiece, it is rather elementary to perform double and triple tonguing on the trumpet, as is demonstrated by its historical use by composers. It is common to use the trumpet ensemble to play rapid, repeated staccato notes, either solo or in harmony with one another as an accompanying, fanfare-like figures.

It is worth noting that the trumpet is the most common brass instrument to use a mute, as it so often takes the role of soloist within subdued passages. Mutes are also very useful to relegate the sound of the trumpet ensemble to an accompanying role in quiet sections.

Perhaps the most misunderstood instrument of the brass family is the tuba. The coiled tubes on this instrument range from 3m to 5.5m, which facilitates the sounding of the lowest notes of the bass tuba.

It serves as the bass of the orchestral brass section. An orchestra usually has a single tuba, though an additional tuba may be included if required. Perhaps surprisingly, the tuba is a relatively agile instrument despite its size. The constant need to replenish the players breath negates this somewhat, but nevertheless the tuba is capable of rapid passages in the low register, albeit long legato phrases are generally unplayable. Wide leaps are easily playable and octave leaps are characteristic of low brass accompaniment.

The tuba is seldom used as a solo instrument, because composers have found its low register unsuitable for foreground melodic material. It is much more usual to find the tube doubling the cellos /bass and the lower winds in reinforcing the lowest end of the orchestra. In fact the most common function of the instrument is to lend weight to the bass of the orchestral tutti, doubling the other bass instruments at the unison of the octave below.