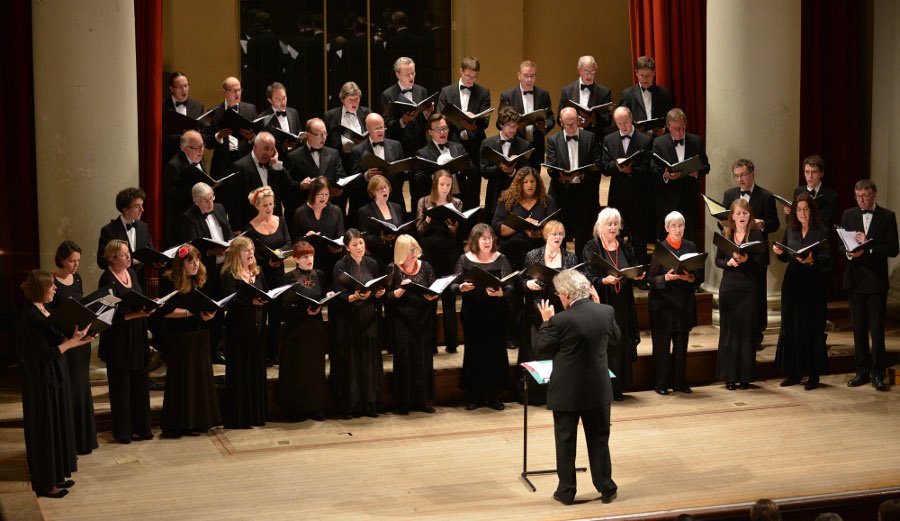 More than any other group, the human voice is often omitted from discussions about orchestration and composition for large ensembles. It is rarely considered part of the orchestra, and indeed, one often neglects to think of the voice as a musical instrument at all despite it being the eldest and most universal means of musical production we have. A recent report from Chorus America estimates that there are over quarter of a million active choirs in the US alone, which demonstrates just how prevalent the medium is. The fact that we are so accustomed to the sound of the human voice makes it very easy to distinguish a sampled choir from the real thing- anyone who has ever used a GPS will be aware that voice synthesis is still in its infancy. This adds a new dimension of challenges to the inclusion of voices in a digital composition- not only does the digital composer need to write musically, idiomatically and intelligently, (s)he also needs to write in a way that avoids the uncanny valley effect. Libraries like East West Symphonic Choirs are pioneering the way beyond simple “oohs” and “aahs” towards fully-fledged word building as part of the virtual choir. In large scores, a multi-part choir can lend enormous weight and gravity to a composition. In this article, we’ll take a brief look at the makeup of a typical classical choir as used in symphonic composition.

A key thing that differentiates a choir from other vocal ensembles is that there is more than one voice per part. These parts are based on the register of the singers, ranging from highest to lowest. In a typical philharmonic choir, there are four types of voice groups – Soprano (high female), Alto (low female), Tenor (High male) and Bass (Low male). This arrangement is commonly abbreviated to SATB.

The soprano is the highest register of female (or falsetto male) voice. A child may also sing in the soprano range- a child soprano is known as a treble. The normal range of a soprano extends from C4 upwards for two octaves. Being the highest voice, it is clearly discernable from the other three, and therefore composers have often assigned the important melodic content to it. Its lower register may sound fragile and breathy, whereas its upper register is extremely sharp, clear and often very powerful. In classical and romantic opera, the soprano virtually always played the part of the female lead.

The alto refers to the second-highest voice in the choir- it can be performed by a low female voice or by a male singing falsetto. Its usual range extends from F3 to F5, which gives it a full bodied and mellow sound in its comfortable range. In classical and romantic opera, the alto usually played the part of the female support character.

The tenor is the highest normal male voice. Its usual range lies between C3 and A4. In its normal register, the tenor ranges in sound from warm and graceful with a bright, full timbre in the high register to a rich, dark, powerful and dramatic timbre in the low. The tenor (especially the lyric tenor) almost always plays the part of the male hero / protagonist in classical opera.

The tenor is the lowest normal male voice. It extends from approximately E2 – E4. The lowest voice in the choir, the bass serves as the foundation for the choir. Because of the low frequencies the bass sings at, it very often emphasizes the low root, fourth or fifth of a given chord. In opera seria, they usually play the blustering antagonist of the hero/heroine or in opera buffa, they serve as the comic-relief fool.

The choir is somewhat more limited than other sections in terms of agility- it is much harder to sing discrete unrelated pitches than it is to play them on an instrument. A pianist can see the keyboard and play mostly anything s(he) likes. An oboist can press a combination of keys and be assured that the correct note will be sounded. A singer has no such luxury- s(he) has to rely on an intimate knowledge of his/her own vocal cords to produce the notes accurately. There is quite a bit more instinct and guesswork involved, and hence it is rather difficult to sing angular lines & nonharmonic intervals over a wide range. It is important to take this into account when crafting melodic lines.

Above all, it is important to write your parts in such that they would be easy to sing. Even though singability isn’t technically a concern for the DAW composer in the same way as it would be for an acoustic composer, it is nevertheless highly advisable to write similarly to how you would if it were for a live choir. By keeping oneself strictly limited to parts that are easily singable, a composer is more likely to create music that reflects live performers as opposed to sample libraries. This is especially important in writing that emulates human voices, as we wish to avoid the uncanny valley effect wherever possible.

There are some general commonsense guidelines one can bear in mind to effectively tackling choral music in your scores.

A comfortable mid-range which spans approximately a minor sixth. It lies in the very middle of a singers range and is easy to sustain over long periods of time. Somewhere in this range will be a singers “sweet spot”, where they will be most comfortable singing. It supports a relaxed or low tension mood.

The extreme range of a singer lies at the very top or bottom of his/her singable range. It is often challenging or uncomfortable to sing in this range for very long. It is effective at climaxes and anti-climaxes to achieve drama and tension. Constant unrelieved use of an extreme can quickly become wearing to both the singer and the listener.

As any given voice approaches its extreme in register, it becomes harder and harder for the singer to control the volume. A singer will have great difficulty projecting his/her lowest notes, resulting in a dramatic drop-off in volume at the lowest end of the staff.  Equally, at the upper extreme, it becomes exceedingly difficult to sing at lower volumes. In light of this, it is better to keep the tessitura (range) for all parts in the moderate range during loud passages if balance is the desired sound. If, on the other hand, drama, tension and strife is the objective, then extending the rages of all voices to the upper limit may be appropriate. Be aware, however, that extended periods of singing at extreme tessitura becomes fatiguing to sing and to listen to.

A key concern when writing for voices is the issue of balance. This is particularly important in the case of large chorus’ of 40+ individual singers when each individual part can become obscured by careless writing. It’s good to model your choral writing after the harmonic series by leaving wide intervals in the low register and increasingly narrow intervals towards the high register. This ensures clarity and balance- low male voices tend to obscure one another when they are singing near or adjacent pitches tighter than a perfect fourth. Conversely, higher female voices regularly sing in parallel thirds, and even dissonant intervals of a major or minor second can sound excellent when supported appropriately with lower harmony. Closely spacing voices in the mid-range (upper voices low, lower voices high) creates an intense, resonant effect. In general, avoid spacing of adjacent parts (S-A / A-T / T-B) more than an octave apart

While it is usually convenient to assign the most movement and melody to the soprano, try to transfer the active (moving) part from voice to voice. This not only provides contrast; it also reflects the normal practice of centuries-old polyphonic choral writing convention. Use a combination of monophony or heterophony (one melody), homophony (chords) and polyphony (two or more melodies) to add sustained interest.

With regard to individual lines- the best lines are those that are easy to sing. Avoid the following movements, as they are difficult to sing in tune.

Vary the number of voices throughout the score. Let one or more of the voices rest from time to time or try different groupings of voices- this will help to achieve not only tonal balance but also timbral variation.